The Flag of South Sudan

“The eyes of the world are on us. Everyone is watching us closely to see whether our first steps in nationhood are steady and confident. We must rise to the occasion and prove that we are capable of playing our honest part in the international community of nations.”

From the official website of the government of South Sudan.

In January the world held its breath as the people of South Sudan participated in a referendum on secession. The referendum was peaceful and over 98% of the Southern
Sudanese voted to separate from northern Sudan.   On July 9th, South Sudan celebrated 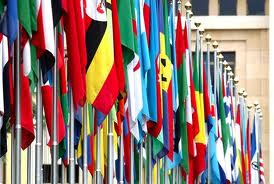 its independence and became the world’s 196th country.

Just one week ago, on July 14th,  the flag was raised at the UN as South Sudan was welcomed as the 193th member country. (Extra credit question: What three countries are not members of the UN?)

Even if you have mixed feelings about the waving of flags, every new country needs one to fly over its capitol. Flags are symbols – symbols grounded in heraldry and ancient associations. Idealistically, the design and colors of a nation’s flag are chosen to embody both the history and best hopes for the future of the country.

I did a little research on the flag of South Sudan. The official description of the South Sudan flag is “A white-fimbriated horizontal tricolour of black, red, and green with a blue triangle at the hoist charged with a five-pointed gold star.” The colors represent the Southern Sudanese people (black), the blood shed for freedom (red), the land (green), peace (white), and the waters of the Nile (blue); the gold star (The Star of Bethlehem), represents the hope for unity of the various states and peoples of South Sudan. 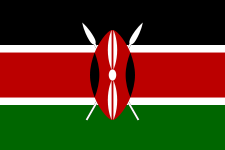 The flag is similar to that of Sudan and to the Kenyan flag. Both the Sudanese and Kenyan flags reflect the Pan-Arab colors which were first adopted by Syria in March 1920, and last by Sudan which officially hoisted it in 1970. The new South Sudan flag keeps the green, with its connection to the Arab world, and the red, white and black and adds blue and gold to set itself apart. 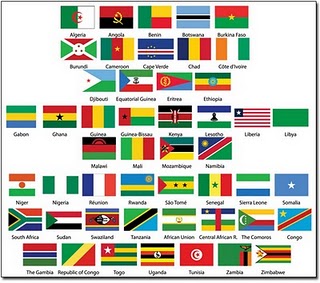 In my searching for information, I was reminded of grade school projects that required the memorizing of flags. I remember thinking that there were not that many colors.

Check out the limited number of colors used in this chart of African flags – black, white, red, yellow, green, blue.

Shahee Ilyas has a beautiful site where you can guess a flag based on pie charts showing the proportion of each color. Again, its mostly variations of the standard colors. 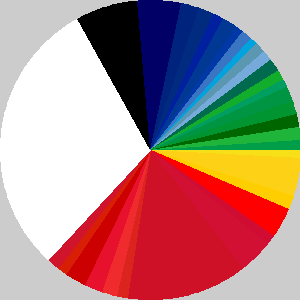 He includes a final pie chart showing the colors of the flags of the world and the percentage that they are used. Fascinating!

In my Smashing Color workshops, I often do a Flag Exercise: pick three colors and use them in the flag for a new country. Students pick all sorts of colors – not just the big six. If you could redo your flag, what colors would you choose for your country? And why?

From Flags to Feasts