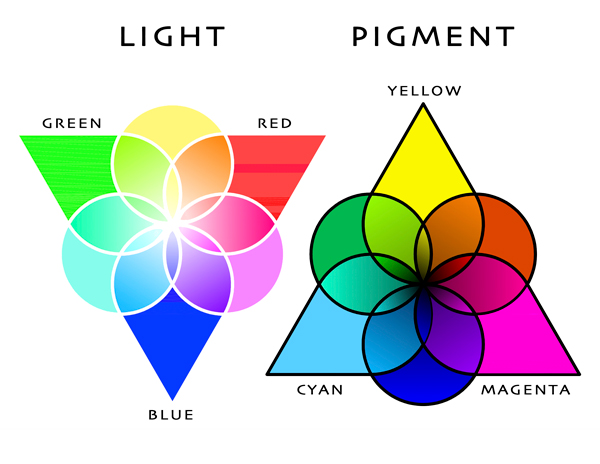 I’ve been looking for the perfect primaries ever since my first experience mixing colors for batik dyeing. At first I thought the manufactures were not making the colors I needed.

Now I know that the differences between mixing light and mixing pigments make it impossible to have perfect primaries in pigments. 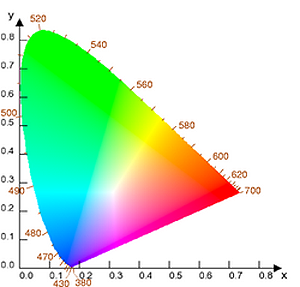 In the additive system (light), three primaries combine to make white light. The 1931 version of the CIE triangle shows the colors that come from Red-Green-Blue primaries.

In the CEI triangle, the spectrum colors run from Blue in the lower left , to Green at the top, to Red in the right corner. 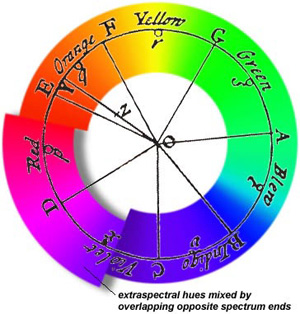 Notice that on the CEI triangle, Magenta is shown opposite green on what is called the “Purple Line”. Along this line are the colors that are “extraspectral” – not in the spectrum. They come from the overlapping of the blue and red ends of the spectrum.

White is in the Middle

White is near the middle in the additive triangle. In order to darken or desaturate the colors the triangle goes to black.

In the subtractive systems (paints, dyes, inks, polymers) the three primaries are supposed to mix to black – the opposite of white. The traditional subtractive primaries 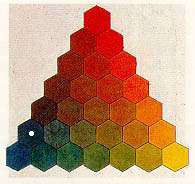 , Red-Yellow-Blue, come close to making a black depending on which colors you chose. For example, an ultramarine blue, alizarin crimson and golden yellow will mix to make a color that is a very dark neutral – almost black. But these same colors will not make clear secondaries.

The modern subtractive primaries, Cyan-Magenta and Yellow will not combine to make black. This is because they are bright primaries designed to imitate the light filled CMY secondaries of the RGB system.

Some manufacturers even add white to their CMY pigment colors to mimic the brilliance of the same colors in light. You will never mix black from these bright primaries. But the advantage of the CMY system is that you can mix much clearer secondaries.

Selecting primaries is always a compromise between mixing clear secondaries and mixing a good black. There are no perfect primaries that will get you both. This should come as a huge relief. It did for me.

Rather than spend lots of time trying to find the perfect primaries or fighting for one system over the other, you can try mixing different combinations of three primaries to see what color palettes are possible. Then you can decide whether or not you want to use a three primary mixing system using your perfect primaries.

This exercise is designed to get you used to thinking of color in triangles rather than circles.